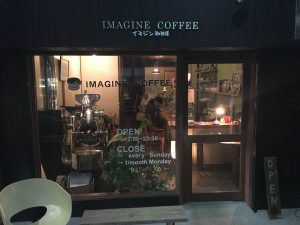 The owner Nobuaki Kishimoto was in his early 20s when he opened the shop in the suburb of Masue city. Back then, the corner of the garage at his grandfather’s home was the shop.
So the shop’s name used to be Hanare Imagine. Hanare means outside building or detached house in Japanese.

He moved the coffee shop downtown of Matsue in Matsue in 2013 . This was the turning point in his career. The shop’s name had changed to Imagine Coffee. The word Hanare was excluded.
A famous architect in Matsue designed the new coffee shop and his fellow craftsmen worked on the interior to complete the shop. He also introduced a roasting machine to pursue excellence in roasting. 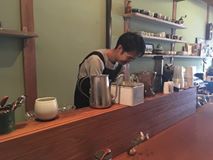 While customers are chatting merrily, the machine’s whirling sound are also fills the shop. Kishimoto stares at the gauge’s roasting logs. He carefully carries out hand picking and cupping which are important to the roasting process.

He studies cutting-edge roasting theories by reading books written in foreign languages. This style is not common in Japan’s coffee roasters which decline emphasis professional techniques than theories. He realizes both techniques and theories are two halves of the same whole. In short, the thinks both of them lead the essence of the roasting. 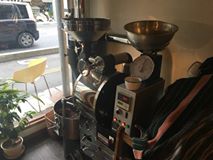 “However road to the goal is far from the current situation” said Kishimoto, I want to brush up my roasting skills and realize them,”said Kishimoto.